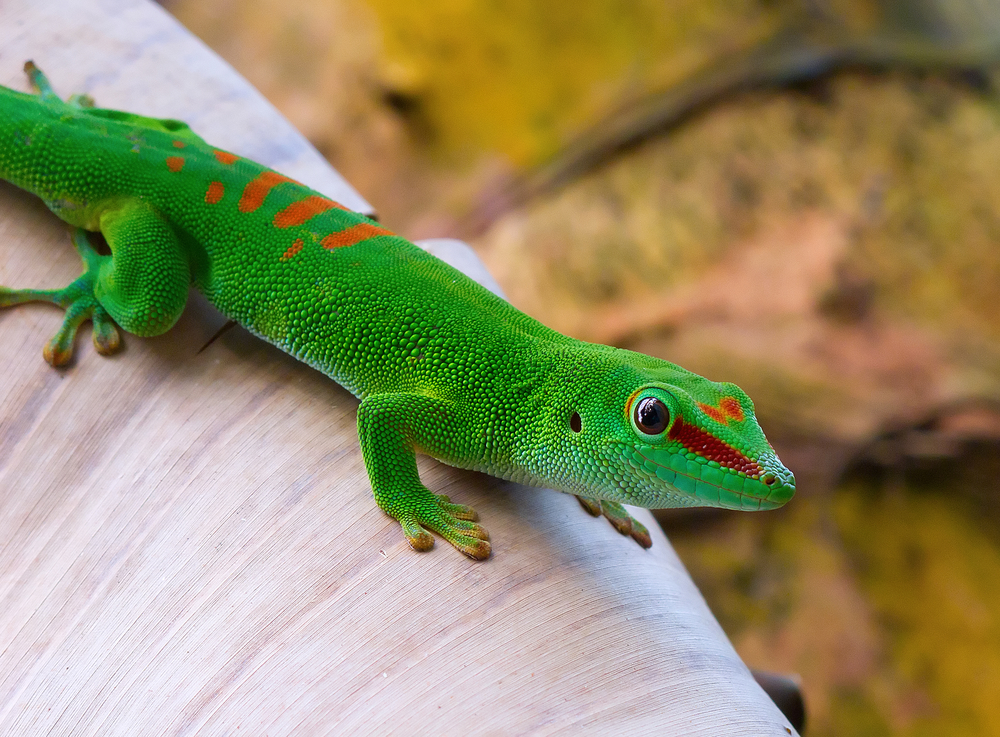 The Madagascar day gecko is one of the most popular reptile species available today, mainly because of its bright colors and ideal size for a home terrarium. This type of gecko, also known by its scientific name Phelsuma madagascariensis madagascariensis, is native to the eastern coast of Madagascar, including several islands offshore; it inhabits the humid, tropical rainforests of the area and mainly dwells in trees. The likeability of this species of gecko makes it appealing to many reptile enthusiasts, who have developed special ways to care for it in captivity. If you own a Madagascar day gecko, read on to learn more about its behavior, care, feeding, and housing.

The Madagascar day gecko is one of the largest living species of day geckos, reaching a total length of 8.7 inches in fully-grown adults. It appears light or bluish green, with a dark red speckled stripe down its back and a rust-colored stripe extending from its nostril to behind its eye. The skin between the scales is often light-colored, and the gecko has flattened toe pads specialized for sticking to smooth surfaces (which you may observe on the sides of the terrarium).

The species is found in the trees along the edge of forests in eastern Madagascar (an island off the coast of Africa), including the islands of Nosy Bohara, Ste. Marie and throughout the Hawaiian Islands. They also inhabit one area in the Florida Keys, where they were artificially introduced and live in a controlled population. The geckos tend to follow civilization, making their homes inside huts and gardens within developed areas.

Madagascar day geckos are, as their name may suggest, active during the day (diurnal). Males are very territorial, and thus, you must be sure to never place two males in one terrarium together; they can also sometimes wound females when the two are in captivity, after which the two must be separated. The mating season lasts between November and April, during which time a female can lay as many as six batches of eggs. The eggs must be incubated (at an ideal temperature of 28 °C), which allows them to hatch after about 55 days. Their average lifespan is six to eight years, although this can be expanded (the longest record is 20 years) in captivity.

Because these geckos are so territorial, it is important to house them individually or in pairs. Males should never be housed together; males and females can sometimes coexist peacefully, but they may also fight (after which time they have to be separated). Some male-female pairings will actually form lifetime bonds, which should not be broken (as they will not accept another mate).

House your geckos within a large, well-planted terrarium; geckos need the space and large amount of plant life to more closely replicate their natural habitat. Bamboo is often used, as it is convenient for climbing, basking, and egg laying and helps maintain humidity within the enclosure. A glass terrarium measuring 24 inches long, 24 inches high, and 12 inches wide is a good size for an adult pair of geckos.

Natural light can be good for the geckos if it is available, but at the same time, make sure that your geckos have adequate shade that they can escape to when the need arises. Use a substrate, such as a peat/soil mixture, coconut fiber or various bark chips, to layer on the bottom of the terrarium; however, be careful that the particles of the substrate are large enough that the gecko can’t accidentally swallow them (leading to intestinal blockage).

As cold-blooded creatures, geckos need a constant source of heat that closely replicates the warmth of the sun that they experience in their hot and humid environment in Madagascar. Use a high-quality UVB bulb, which will allow the geckos to generate an adequate supply of Vitamin D3 within their bodies; an incandescent light bulb should create a basking spot of 95 degrees Fahrenheit, while the temperature in the rest of the terrarium can hover between 82 and 86 degrees during the day and 75 to 82 degrees at night. Switch to a night bulb at the appropriate intervals every day to continue supplying heat while mimicking the geckos’ natural perception of night and day.

Maintaining humidity within the terrarium is also important; make sure to mist daily to keep the humidity between 50 and 70 percent at all times. Geckos lick their water from the surfaces around them, so pay extra attention to the surfaces of the leaves and branches that you mist.

In the wild, Madagascar day geckos eat insects, fruit, and nectar; they can maintain essentially the same diet in captivity, with crickets, wax moth larvae, fruit flies,  mealworms supplemented by fresh tropical fruits, honey and fruity baby foods. Cockroaches, especially  dubia roaches, are especially nutritious for these geckos. These can be purchased at ABDragons.